Everything Under the Moon

RyukaAscendant wrote:Well while most of the time I've seen it called the Ellis symbol there were a couple instances of it being called the Eris symbol.

This is the Sigil of Eris: 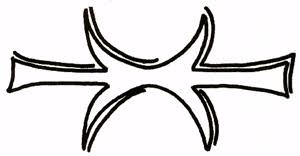 As far as the sigil in question: Meh.
Whatever power or authority we give it is what it is going to have on effect. For instance, think of the power and authority we as people give to the swastika. The experiment many years ago was to create just that type of effect. I personally think it was not as effective, nor did I find the attempt of import. Here is what DKMU, the group who created the Ellis Sigil, said about it:


DKMU wrote:(The)Ellis(Sigil) was a symbol that could be attached to any other spell, place of power, or anywhere the practitioner wished. Each copy of Ellis would be connected to all the others in a web, with each feeding off of the others in a massive feedback loop. The DKMU Oistar Guide states, “The only point of the linking sigil is to form a magick net, all working to increase the levels of magick in the world, like a giant spell that evolves and grows each time we add to it.” By placing the sigil somewhere, the magician was said to be creating a space of high weirdness, not only affecting any magical working it was connected to, but also affecting any random passerby in the area. For this reason, spray painting, stickering, or chalking Ellis in highly trafficked urban areas was encouraged.

Chaos is half of the yin yang.
It's what makes all things possible.
If it weren't for chaos, we would still be basic amino acids in the bottom of a puddle.
Love and Blessings
Top

Astro Logical 1 wrote:Chaos is half of the yin yang.
It's what makes all things possible.
If it weren't for chaos, we would still be basic amino acids in the bottom of a puddle.

I agree. Nature is inherently chaotic.
I am the Earth, The Sun and the Stars
And I am the also the Moon
I am all animal and birds,
And I am the outcast as well, and the thief
I am the low person of dreadful deeds,
And the great person of excellent deeds
I am Female. I am Male and I am Neuter. - Devi
Top

My experiences with it have been mostly positive. However, sometimes the results have been extremely erratic and unpredictable. The good side is that it always delivers on its promises. Seeing as it is magick boiled down to its bare essence, it doesn't have the possibility of backfiring or spells failing on you because you didn't do something right. I guess the sacrifice (or downside, depending on how you look at it) would be that it is very difficult to control, and also to me a bit redundant, because ALL magick can be defined as chaos magic, and vice-versa. They are one and of the same.
Top