Everything Under the Moon

A resonance study is where one picks a symbol and finds every available source and opinion on every conceivable detail - Historical, Observational, in art, in literature, across cultures and religions - even in reimaginings and pop culture.

- it is immersing yourself in a things symbolic nature so you may then put it all to the back of your mind and through subsequent meditation, trance and Intuition (with the subconscious layers of coorepondance) of the symbol, find the hidden paths to what lies behind it.

I invite people to join me, and post or link such media.

The symbol of choice currently is: The Pentacle and/or Pentagram(especially in relation to its use as a magical tool).

Re: Resonance Study: The pentegram / Pentacle

My immediate observation is that the Pentagram is a magic circle... or a 2D representation of a 3D image.

You have the Circle (the magic circle or sacred enclosure).

You have the Square (the four elements of western practice).

You have an upward (or downward) 'cone of power'. Microcosm to/from Macrocosm (the ritual circle being a working model or Microcosm of the universe).

I also was surprised to find that the Bahai faiths word for it was Haykal or 'temple' as I came to the intuitive observation that the symbol 'IS' the altar / the foci.
_______

[According to a Golden Dawn Website]
The word pentacle or pantacle is derived from the Latin word pentaculum, which is said by some to mean “small painting.” Eliphas Levi described the pentacle as being similar to a talisman. The pentacle can be said to represent a container for the magical forces inscribed on it. It is used to encircle these forces and bring them into physical or earthly manifestation. It is used by the adept in all magical workings pertaining to the nature of Earth and is under the presidency of the “Pentacle of the Tarot.”

(Note the symbol or 'Talisman' of the Golden Dawn is actually what most of us would call a Hexegram (aka Star of David) being an ancient symbol of the union of the Masculine and Feminine (upward and downward intersecting triangle).
Top

I'm taken by the fact there are so many flowers with five points shaped like the pentagram. The wax flower (Hoya) is especially cool because it has 2 distinct pentagrams, the inner one is inverted and the very center produces yet another pentagram for a total of 3, to me this is an indication of its never ending ability, like the golden ratio.
Plus it has the bonus number of '3' pentagrams!

Source: https://en.m.wikipedia.org/wiki/Hoya_(plant)
Bb, Firebird
“There are things known and things unknown and in between are the Doors.”
― Jim Morrison
“All I have seen teaches me to trust the Creator for all I have not seen.”
― RWEmerson

Greek astronomers observed that in an 8 year span of time, the path of the planet Venus forms a pentagram as it orbits the sun. The Earth also creates a natural pentagram in its orbit around the sun. The Earth’s orbit is 360 degrees and 365 revolutions or days within the orbit. The only number that evenly divides both 360 and 365 is 5. This gives the ratio 72/73 or, 72 degrees per 73 days. Each of these points marks 1/5 of the orbit. If you connect the dots it creates a pentagram.
Top

Oh ya, that is really pretty fantastic, and I love that it is called the rose of Venus!
Flowers! again!

“There are things known and things unknown and in between are the Doors.”
― Jim Morrison
“All I have seen teaches me to trust the Creator for all I have not seen.”
― RWEmerson 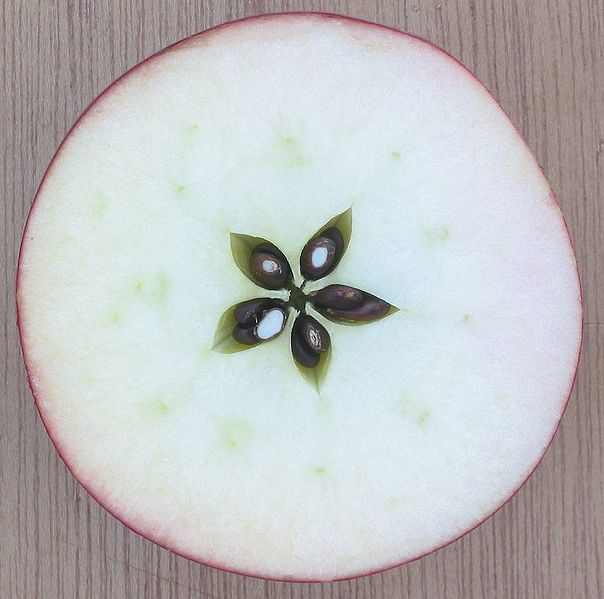 I suppose the connection of the symbol to the golden ratio reinforces it as a symbol of order / structure within chaos / repeating patterns? 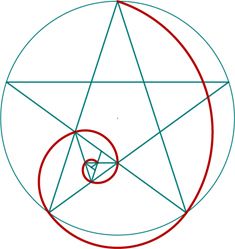 So reflecting on that video above, I'm inspired to suggest the pentangle is linked to the spiral, the ratio and by this, linking the microcosm and the macrocosm?

The pentegram however is encircled (the circle adding a whole other layer of symbolism).

------
To clarify my comment regarding structure and chaos, I'm inclined toward chaos theory.

From the Greek Micros, small; and Kosmos, a world. The "little world" of the human being, as distinct from the macrocosm, or great world, of the universe. The relationship between microcosm and macrocosm has preoccupied philosophers for many centuries, with the macrocosm believed to be symbolized in the microcosm. According to some occultists, the microcosm was itself symbolized by the pentagram, or pentacle, —a five-pointed star believed to represent humanity and the summation of the occult forces. Paracelsus held that this sign had a marvelous magical power over spirits and that all magic figures and kabalistic signs could be reduced to two—the microcosm and the macrocosm..."

>>> Of course, something representative of the microcosm is also/equally representative to the macrocosm; 'as above, so below'. <<<
Top
Post Reply
8 posts • Page 1 of 1

Return to “The Elements - Earth, Fire, Air, and Water”