Open discussion about how our beliefs have been affected by popular culture.
Post Reply
8 posts • Page 1 of 1

I found this really awesome article (almost a bibliography, in a way) about many of the symbols used in the show Supernatural, their meanings (within the show and within real life), and the accuracy of their depiction. Having just recently discovered this show, I've become a huge fan, and when I first started watching it, I really enjoyed both how deeply they delved into folklore as well as how closely they've tried to stay to that actual lore. I mean, it's Hollywood, so there's always going to be things that are exaggerated, but I've always been insanely pleased with the little details that the writers (and the production crew) have paid attention to.

For example, here's a post of how they used the rune Algiz:


It would make perfect sense that among the several sigils, seals and symbols to call out whatever thing that dragged Dean out of Hell, there would be some protective symbols too.

The Algiz symbol, also known as the "Rune of Watchfulness" represents protection, assistance, defense, warning, support in adversity. It may also indicate a spiritual helper or guide. It is used in magic to make hunting more successful*, although I don't think it means the same kind of hunting as the Winchesters!

It is associated with the Norse myths of Heimall, a protector and guardian who watches the gates between worlds and who holds his sword in one hand and his horn in the other guarding the divine realm of Asgard. 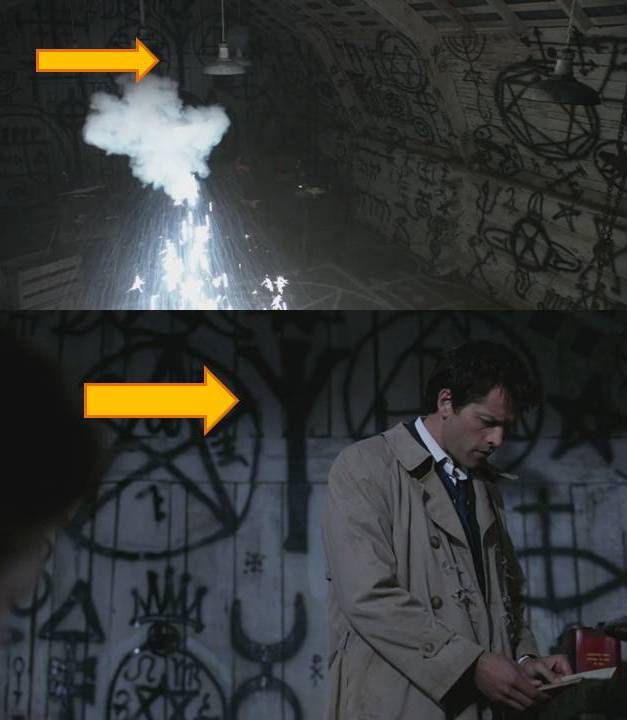 There is a variety of other attributes associated with Algiz, including some that really fit the Supernatural mythology story line and characters:
- Mystical and religious communication with non-human sentient beings
- Reversed: vulnerability and sacrifice without gain. There are people who deceive and mislead you and may you become the scapegoat for the failures of others. (x)
- Algiz signals that protection may be expected from an outside source in a conflict that is either forthcoming or is already ongoing. 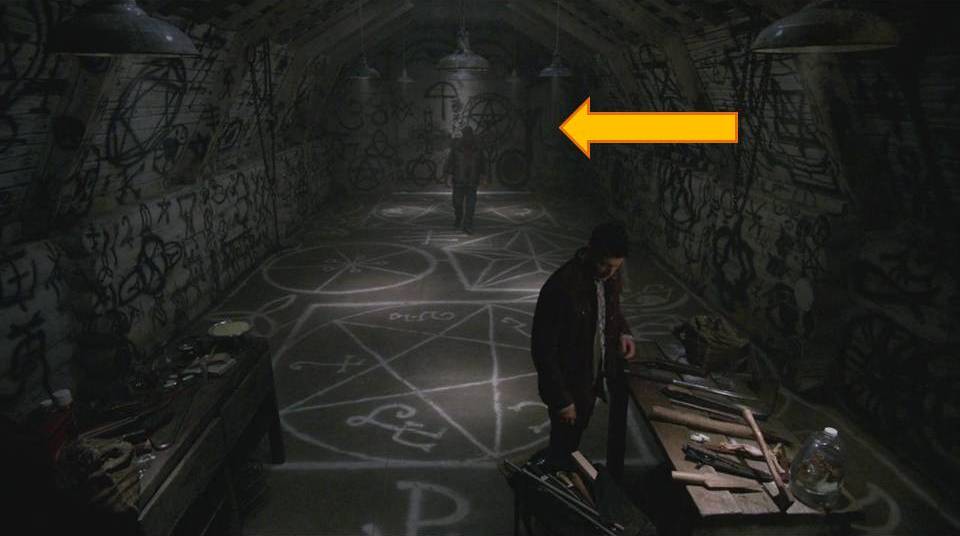 Bobby had painted the rune at both ends of the barn. You can see it next to the doors that Castiel enters and at the back where Dean learns who had gripped him tight and raised him from perdition.


Here's the link to the page with this particular blurb, and you can easily see the rest of them, there are tons: http://spn-symbols.livejournal.com/
Dance like the Maiden
Laugh like the Mother
Think like the Crone
Top

I absolutely love Supernatural and I really enjoy the attention they pay to details too. Actually, there are some things i learned from the show - by seeing them there and then doing some research of course. But to be fair, I enjoyed the first seasons more, before the angels and leviathans. I have seen several shows that dabble in paganism and folk magick and liked very few of them. But, really, Supernatural is one hell of a show

I completely agree!! It took me just over a week to catch up. I miss the more "monster of the week" episodes, where they really did delve into more of American folklore than they do now. The recent arcs are good, but yeah, the first few seasons were some of the best, to me anyways.

Although I wouldn't trade Castiel's presence in the show for anything, lol. I love that angel!!

I'm really curious where they're going to go from here though. There's rumors that they may end the show after the 10th season, which I have mixed feelings about. At any rate, I hope they try to steer back towards the more "average" monsters and legends.

I hope so too. And as much as I love Castiel, I like Gabriel a lot better

Still, until the Leviathans, the show was fine. The 9th season was OK, but not like the first seasons where I didn't really sleep to watch what happens next (I discovered the show 2 years ago and it took me about 2 months to watch the 6 seasons I had missed

). I would enjoy them to go abroad to look into other countries legends and gods as I didn't really like the idea of European gods based in the US, it doesn't make much sense to me

Anyway, about the symbols - I really like the demon traps.
When everybody is thinking the same, nobody is thinking enough!
No battle is over until I win!
"Imagination creates reality". Richard Wagner
Top

Who doesn't want the Impala?? I missed it so much when they had to ditch it in Season 7. It was like a character was missing. And seeing them go international would be awesome!!

Anyway, back to the symbols, lol.

From what I've read, the Demon Traps are based on the Key of Solomon, a summoning and binding circle that, supposedly, King Solomon used himself to summon and bind demons.

Example of a Key of Solomon

The one they use in the show is a very simplified version of this, basically a pentacle with symbols along the edges (that apparently have no corresponding meaning). 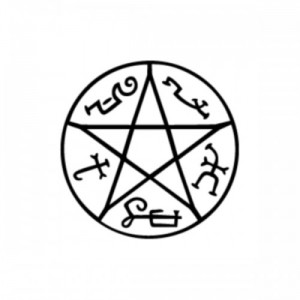 What I really like about not only how they've incorporated a pentacle into this particular symbol, but how they use it throughout the show is that it's primary purpose is protection. It's a positive symbol, and powerfully enough so that Sam and Dean have one each tattooed on their chests to ward against possession.
Dance like the Maiden
Laugh like the Mother
Think like the Crone
Top

Yeah, I have read the Lesser key of Solomon and the demon traps kinda reminded me of the seals of Solomon, but they have some alterations in the show. And yes, the pentacle is used as it's supposed to - for protection.
I think this particular show can be used as a guide to witchcraft for beginners (and here I hear the preachers chore against it). I have always supported the idea of learning through what you find interesting. And except the symbols, there are many other things you can learn - creatures, folklore, gods, demon hierarchy, legends, weapons, egregors etc.
When everybody is thinking the same, nobody is thinking enough!
No battle is over until I win!
"Imagination creates reality". Richard Wagner
Top

I will for sure have to check out those articles, these are awesome! I'm just now getting caught up after going on a brief hiatus, and I was actually just recently wondering how close to actual mythology/symbology they stayed. This is exactly what I was looking for! Thank you!

And on a side note, wow do I wish I had the time and money to restore an impala like that! Gorgeous. It's no wonder it's so hard to find good frames/parts on Craigslist, my brother says the Supernatural crew has rebuilt EIGHT of them so far and demolished seven of those in various ways. Poor Baby.


I just watch it for the cute guys. Yeah, I guess the show's OK, too.