No rush! I hope you feel better soon. <3
Top

Very good ideas. I'm just starting to create my first altar, but I live with people who would probably not accept my beliefs and an altar like this will be a good start for me. (:
Top

hey guys, ill plan out another one just been going through a major crossroads and to be honest forgot about my next set of altars

I would love to know
Top

So ik its been awhile and i promised some car examples and i will do that as another set later but I went to my cousins recently and just thought this would be a better post atm.
Alot of people who look at these posts are looking for something that Christians will not notice as pagan or wiccan and so I thought I would show off some spots in my Cousin's house that are not altars to her but to me scream altar. See my cousin is a in her 40s and is a good southern christian war veteran and republican. So for her to have anything pagan or wiccan lets just say she would flip out if she knew that her house had so many altars set up around the place that she didnt even know could be altars.

So to get started I dont have a picture of this one because i didnt get around to it before we had to move it to decorate for her big halloween party but she has a nice pet altar set up for her cats.
On a shelf she had this long picture frame for cats and it had several little places to place your cat pics on where she put one pic of every cat she has including the ones that have passed. also on that shelf she placed several little kitten statues that hang by their tail. To her this was just showing off her cats and remembering them which is was a pet altar really is a remembering and honoring of all your pets.

im going back in a few days and might get a pic of it then if i remember.


now that i got the one that i forgot to take a pic of lets move on to the ones that i do have pictures of.

Morning Altar
Every year my aunt sets up this altar on the day of my grampa or uncles passing or birthday depending on when she has time off, they all look about the same and are her way of honoring them even though they have passed: 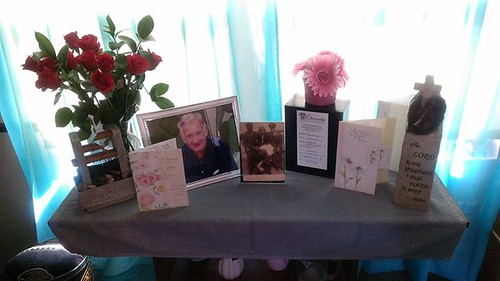 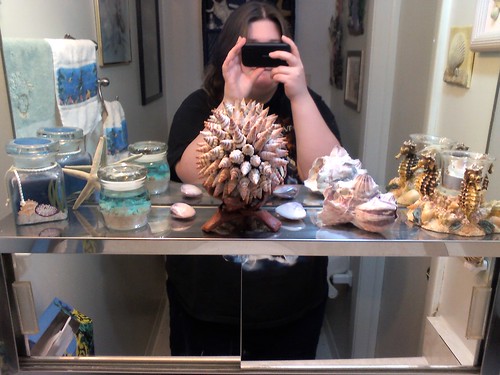 This is the general set up of my cousins bathroom covered in beach and sea things in fact she has another altar set up on the black wicker cabinet above the toilet (you can kinda see it behind my head) that would be a great place to keep some herbs and tools in. The cabinet has an array of shells and bottles including some sand from the beach and sea glass also.

Now on to why i think this makes a great altar 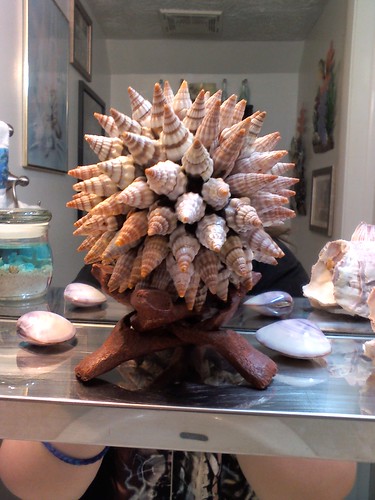 This makes for a cool scrying ball and is set on a painted drift wood stand so you get earth, and spirit in this aspect 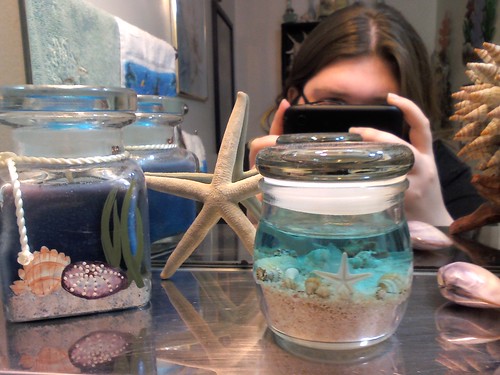 This bottle contains sand, sea shells and a jell made using sea water from our local beach. This jar alone could be a very simple sea witch altar because off it having so many aspects of all the elements, the connection to the sea and simple put the energy it contains. It smells like the sea, looks like the ocean floor and has all the aspects of the elements trapped inside the jar. 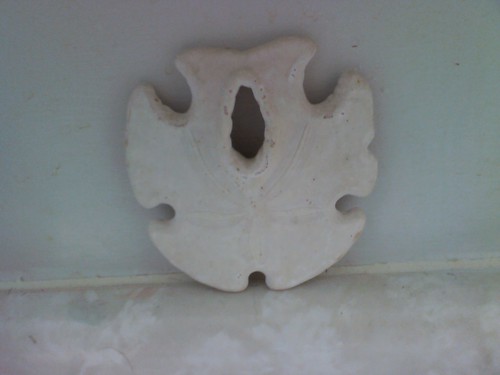 She also keeps a sand dollar under the altar, for me this tied the whole thing together with that sand dollar you could run some water over it why your standing there and ask the god or goddess at your altar to help you through the day or thank them for working with you.


Simple Elemental Altar
Alright guys remeber that simple element altar I was talkin about
well here it is: 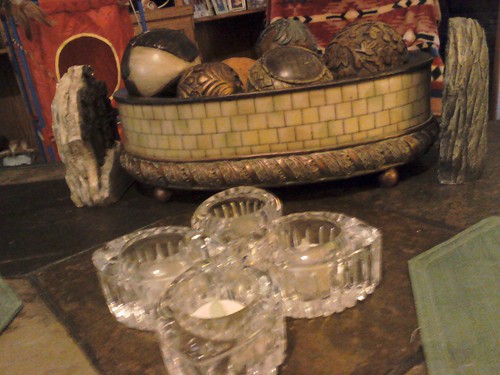 I also noticed her bin of balls and decided i would also talk about it because that was a altar idea i hadnt though about
See in that bin is a lot of carved balls, some have stone in it also but mostly just pained wood thats carved and has many aspects that i actually found would make as a good earth altar or Egyptian altar (my cousin has a lot of Egyptian and Bastet stuff cus she loves cats sorry i didnt get pics of those again ill try to get pics of it later when i go back) These balls had savanna themes and spoke of the earth to me with the coloring and rather heavy wooden feel to the balls and stone. Im kinda tempted to find one with water elements and keep it on my book shelf in my room cus it just felt so grounding to sleep by it at night. 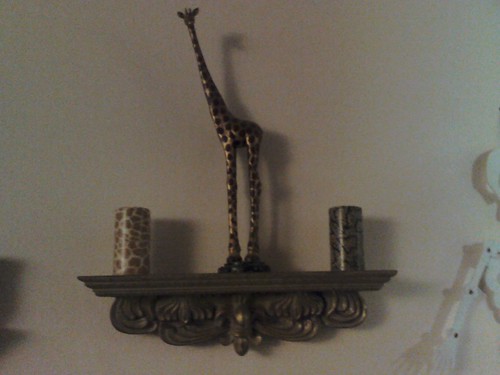 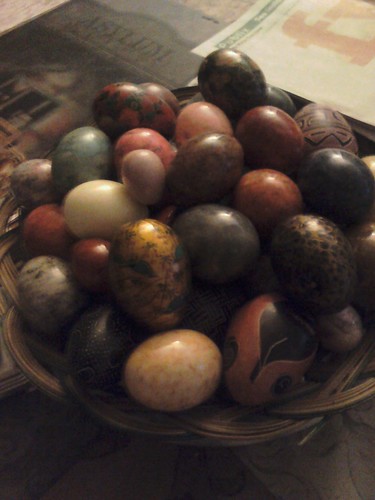 My cousin collects these stone and wooden eggs and leaves them in this bowl in the middle of her dining room table. In fact she also has some bigger ones that are on stands around some Egyptian statues she keeps in a china cabinet. This could easily be a VERY simple Ostara altar or stone altar and you could feel it with stones that have a meaning to you at the time or a property that you feel you need at the moment. in this way you could kill two birds with one stone so to speak and have a altar for year around use but also Ostara use as well. 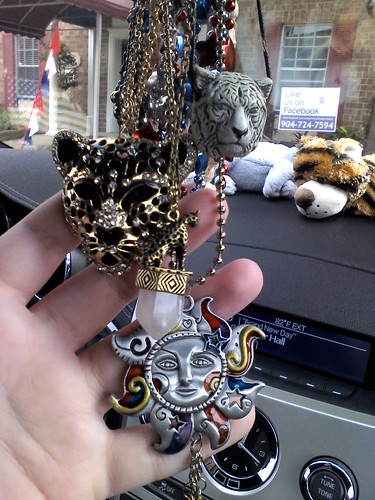 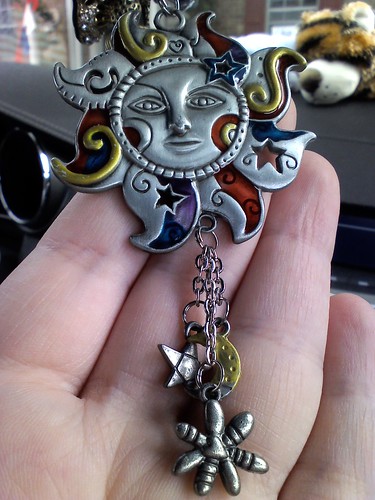 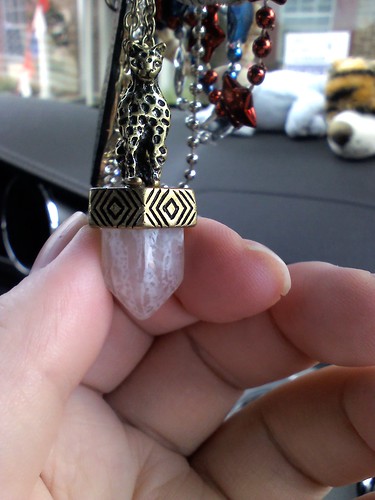 This is a nice pendulum


Alright guys this is all i have for today sorry if any of this didnt sound accurate or in much detail im actually only back for a day or two before i go back i got sick and had to come home >< im leaving tomorrow to go back and to be honest im still sleepy lol anyway i promise ill come back and write some more just been all over the place
Oh and a quick note about this post:

All of these are from my cousin's house and are exactly how she set them up, that is why i shared these because they scream altar to me but to her they are just decorations or honoring of people and pets, I wonted to show that even Christians set up altars without know it and that you dont have to be scared to set up altars in your home because in most cases no one will realize that is what it is
Top

Interesting! Thank you for posting these tips. I live in a small apartment in Austin,Texas. Not planning to set up a permanent altar just yet because there is very little space. My husband is opened minded and knows I am a Pagan. I am going to wait until I move to a house to set up an altar.
Jessica [aka Whitewolf]
Top

Thanks so much! And if you work with hades, you should check out my spirit contact tarot using a spell for persephond!
O Goddes, all praise to you. Ta em hotep, anekh hrak. Lady Isis, I adore you. Nebet aset, tu a atu.
Top

how about you pm it to me Noah C thanks

I love some of these. I would like to set something up at work, where I must be extremely discrete.
Myrth
Top

lol glad i could help cloverfox
and thanks Myrth

also just a quick altaer tip why im on

you could get a metal dog bowl any metal bowl really and some colored dry erase markers and make a makeshift altar/cauldrent use the markers to write on the outside things your working on in the color that pretains to the work
for example black for protection or purple for ability work or spirit work
and say write a sigil for protection or a few runes
or like i did the yule i just wrote a few sigils, the god and goddess symbol and the words thanks and blessings in runes
Top

Baby Bear!!! Oh my gosh, how did i miss this?
Excellent info, beautiful altars, I'm going to bookmark this, thanks for sharing....amazing

Pet Altar
Alright guys i promised I would show off my cousins pet altar and now that I live with her its easier to get pics lol
so here goes.. sorry for the bad lighting on the pics 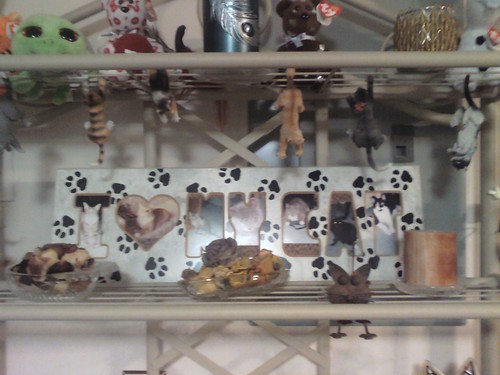 So this is the basic set up...
she has a candle, dried flower petals, cat statues and a frame dedicated to her pets of old and new
Top
Post Reply
59 posts