About jimsonweed, if you can find a hougan, he could most definitely tell you the dosage needed according to your weight, height and -for some reason, shoe size. Or maybe that's just if your feet are creepily small like mine...

What is that potion meant to be used for? If it's for trance the hallucinating properties are probably meant to help you slip in it.

I have a question, do bitter apple and apple blossom cause hallucinations or are they just poisonous?
Top

Just poisonous from observation. I live in Northern Virginia where we have the Apple Blossom festival. We have flowering apple trees everywhere around town and no one seems to be in a hurry to pick them. I'm not certain but I think the local junkies would jump on it if it did have other side effects.
Do not attempt, Achieve
Do not hear, Listen
Do not go blindly forward, See
Do not judge, Understand
Do not forget, for in this you shall learn nothing
-The Judge
Top

Mistletoe... Would have never guessed something you kiss under could be deadly! D:
Top

I'm like a deadly nightshade....
And I know that in Italy belladonna means beautiful woman!

belladonna and deadly nightshade can be two totally different plants

see ....this is the reason I encourage everyone to know their plants by the botanical name....maybe I'll post my essay on these two particular plants later...
FF

NorseBreeze wrote:Mistletoe... Would have never guessed something you kiss under could be deadly! D:

Well its deadly to Baldr in Norse mythology......
Top

I'm like a deadly nightshade....
And I know that in Italy belladonna means beautiful woman!

belladonna and deadly nightshade can be two totally different plants

see ....this is the reason I encourage everyone to know their plants by the botanical name....maybe I'll post my essay on these two particular plants later...
FF

I think that would be a good idea. I know them as two seperate plants, but I have also heard of Belladonna being called deadly nightshade as well. This is why it is important to know the scientific names as well as the botanical names and folknames. Regional differences can have different names for plants, but the scientific name will always be the same.
Top

Always be EXTRA careful for hemlock, because it is often confused for wild carrot (aka Queen Anne's Lace). They look very similar, and even touching hemlock can be harmful. 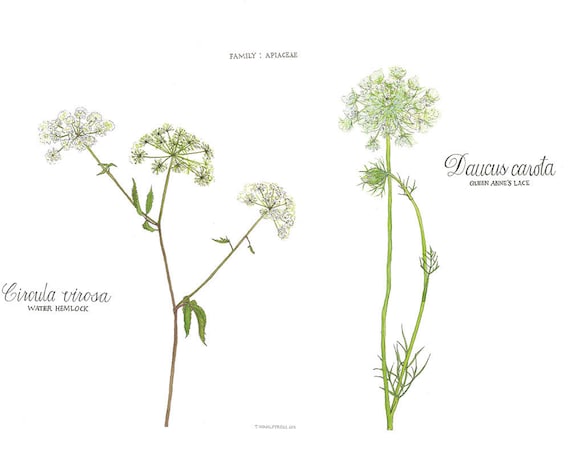 This is a good thread. Calamus was listed as a poisonous plant. If it was refering to Acorus calamus, it isn't poisonus. It's actually a very important medicinal plant known as Wekay, Sweet Flag, or Mongol Poison. It's called Mongol Poison cause if it's planted along the shore of a body of water that is polluted with bacteria, etc, it can purify the water. Sundancers and other people who engage in endurance activities will chew on bits of the root as it's a thirst and hunger suppressant. It may be listed as poisonous plant cause it contains a chemical that alters reality, but you'd have to eat huge amounts. HUGE amounts. It's always best to only eat stuff that one's sure of, and common names can be tricky. Like nightshades, don't eat them, and I don't want to get into trouble here by helping anyone poison themselves... Some nightshades can be eaten only if they are the right species and if the berries are totally ripe. If ya don't know, don't eat them. Stuff like Atropa belladona, or Mandragora autumnalis have great purposes even though they are poisonous.

Sorry for being so wordy, but on the safer side, some plants that are overlooked that are easy to grow and are generally people friendly would be Spikenard, Chickory, Yarrow, and many Sages.
Top

Victoria Mnemosyne wrote:Anyone know about jimsonweed? I've read of a voodoo potion that involves drinking jimsonweed sulfur and honey together, but I also heard jimsonweed is poisonous and that it causes hallucinations. Is there a safe dosage?

Various species of Datura, or "Jimson weed", have been used in shamanic/pagan traditions by a variety of cultures around the world. Datura stramonium is, for example, considered sacred to Shiva in India. Datura was known to many Native American tribes - as I've posted elsewhere, I'm currently working with the Chumash goddess Momoy, who is associated with datura wrightii, although I do not incorporate actual datura flowers into my rituals, nor will I ingest it. This is because it is extremely dangerous. There are reports every year of people foolishly trying to "trip" on datura (or other deliriants in the Solanaceae family, also known as nighshade plants) that lead to hospitalization or death. Also, even if you survive physically, you may still harm yourself mentally or spiritually. Deliriant trips are not like taking a psychedelic. They are usually described as incredibly unpleasant and disorienting, and there are "true hallucinations" (that is, you don't recognize them as hallucinations, but rather think that they are real). You're usually out for a few days, too.

This is not to say that there is no proper use for these; if you are a shaman trained in the use of these plants, risk can be minimized, and the experience can be used as a legitimate rite of passage. Even then, though, there is still danger, in part because the amount of active chemicals present in these plants varies greatly. Even amongst the Chumash, who used datura liberally, there was still a chance that you could die.

When I was in Peru drinking Ayahuasca, one of the shaman told me a story about how once, a group of people who were drinking ayahuasca brought with them some toé (Brugmansia, another plant in the same faimly), and they asked him if they could smoke it during the ayahuasca ceremony. He told them that first he would sing the toé icaro (icaros are songs that amazonian shaman use to invoke different spirits, etc), and then, if they still wanted to smoke it, they could. The ceremony began, he invoked the toé, and everyone was so terrified that they never smoked it.

Anyway, on another note:


Erebus Elysium wrote:Unfortunately, the amanita is so virulently poisonous that it is unwise to use it.

I would like to contest this. There are numerous documented reports of people ingesting amanitas. It can have some unpleasant physically side effects in large doses, but I wouldn't call it "virulently poisonous". I can say from personal experience that the effects of eating amanita muscaria are not all that different from just being too drunk on alcohol.
love is the whole and more than all
Top

I've grown most of these in my 'Night Garden' when I was living at home in Vermont. I had nightshade, hemlock, official mandrake (even that worked!!), aconite and a variety of night-blooming and 'black' flowers (deep red shades, as close to black as I could find). It was a very special garden and only lasted one year but it was very special. I've recently bought most of these poisonous herbs in seed form (also henbane this time) and will plant them in fall as per directions. Next year I'll have a poisonous garden again. (I live in a city-centre flat with a large balcony, so no animals are being endangered by this pursuit!) xx K

Edit - after reading the posts above about the difference between belladonna and nightshade, I can confirm that I grew atropa belladonna.
~Kitchen Witch~
Top
Post Reply
41 posts